This image has been circulating on LinkedIn as a tongue and cheek example of a miminum viable product. 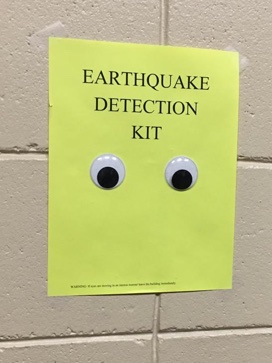 Of course, at least one of the responses was that it's not an MVP without some extras. It needs 24/7 monitoring or a video camera with a motion alarm. It needs to detect quakes that occur off hours or when you're otherwise away from the detector. The trouble with this statement is the same as with the initial claimed MVP status of this design - both claims make assumptions about requirements. The initial claim assumes you're okay missing quakes when you're not around and the second assumes you really do need to know. To identify an MVP, you need to understand what it means to be viable. You need to understand the goals and requirements of your stakeholders and user community.

Personally, I'm sympathetic to the initial claim that two googly eyes stuck on a shet construction paper might actually be a viable earthquake detector. As a Texan transplant to the Northeast, I'd never experienced an earthquake until the 2011 Virginia earthquake rattled the walls of my suburban Philly office. Not having any real idea what was going on, my co-workers and I walked over to a wall of windows to figure it out. Nothing bad happened, but it wasn't a smart move, and exactly the sort of thing a wall mounted earthquake detector might have helped avoid. The product doesn't do much, but it does do something, and that might well be enough that it's viable.

This viability, though, is contingent on the fact that there was no need to know about earthquakes that occurred off-hours. Add that requirement in, and more capability is needed. The power of the MVP is that it forces you to develop a better understanding of what it is that you're trying to accomplish. Getting to an MVP is less about the product and more about the requirements that drive the creation of that product.

In a field like technology, where practicioners are often attracted to the technology itself, the distinction between what is truly required and what is not can be easy to miss. Personally, I came into this field because I like building things. It's fun and rewarding to turn an idea into a working system. The trouble with the MVP from this point of view is that defining a truly minimum product may easily eliminate the need to build something cool. The answer may well be that nNo, you don't get to build the video detection system, because you don't need it and your time is better spent elsewhere. The notion of the MVP inherently pulls you away from the act the build and forces you to to consider that there may be no immediate value in the thing you aim to build.

One of my first consulting engagments was years ago, for a bank building out a power trading system. They wanted to enter the business to hedge other trades, and the lack of a trading system to enforce controls limits was the reason they couldn't. Contrary to the advice of my team's leadership, they initially decided to scratch build a trading system in Java. There were two parts of this experience that spoke to the idea of understanding requirements and the scope of the minimum viable product.

The first case can be boiled down to the phrase 'training issue'. Coming from a background of packaged software development, my instincts at the time were competely aligned around building software that helps avoid user error. In mass market software, you can't train all of your users, so the software has to fill the gap. There's a higher standard for viability in that the software is required to do more and be more reliable.

This trading platform was different in that it was in-house software with a user base known that numbered in the dozens. With a user base that well and known small, it's feasable to just train everybody to avoid bugs. A crashing, high severity bug that might block a mass market software release might just be addressed by training users to avoid it. This can be much faster, which is important when the software schedule is blocking the business from operating in the first place. The software fix might not actually be required for the product to be viable. This was less perfect software, and more about getting to minimum viability and getting out of the way of a business that needed to run.

The second part of the story is that most of the way through the first phase of the build, the client dropped the custom build entirely. Instead, they'd deploy a commercial trading platform with some light customizations. There was a lot less to build, but it went live much more quickly, particularly in the more complex subsequent phases of the work. It turned out that none of the detailed customizations enabled by the custom build were actually required.

Note that this is not fundementally a negative message. What the MVP lets you do is lower the cost of your build by focusing on what is truly required. In the case of a trading organization, it can get your traders doing their job more quickly. In the case of an earthquake detector, maybe it means you can afford more than just one. Lowering the cost of your product can enable it to be used sooner and in more ways than otherwise.

The concept of an MVP has power because it focuses your attention on the actual requirements you're trying to meet. With that clearer focus, you can achieve lower costs by reducing your scope. This in turn implies you can afford to do more of real value with the limited resources you have available. It's not as much about doing less, as it is about doingo more of value with the resources you have at hand. That's a powerful thing, and something to keep in mind as you decide what you really must build.